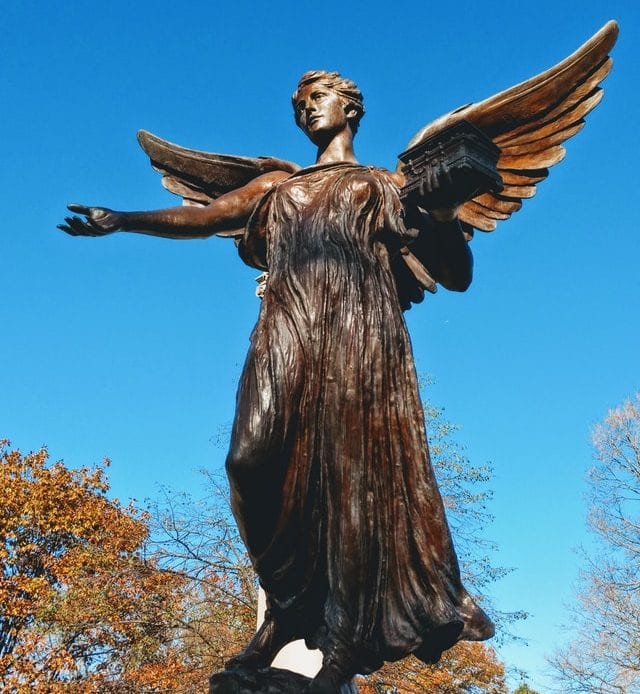 The Bible is full of mythical realms, creatures, and beings, both benevolent and malevolent in nature. Containing creation & apocalypse myths, dreadful monsters, and guardian spirits, one of the most-read religious scriptures in the world is not only educating but also entertaining. It is needless to say that the Biblical lore has been the subject of much curiosity for ages.

Biblical Myths and Lore about Angels

One of the most well-known beings in the Bible are the angels who, according to popular myths, are spirit guardians of humanity on Earth. Or is it? If these cosmic beings pique your curiosity too, then here’s everything you need to know about the fascinating Biblical angels.

Angels were created by God Almighty.

Yes, that’s right. God who created each and everything in the Universe, also created angels. These beings haven’t existed since the dawn of time. According to Nehemiah 9:6, first God created multitudes of heavens and then the heavenly host. Heavenly host or in simpler terms, the heavenly armies, include angels, apart from other beings.

Angels don’t have a physical form.

Biblical angels are essentially celestial spirits. Therefore, they are formless and can’t be seen through the human eye. The purpose of their creation was to carry God’s messages, to reveal His plans (sometimes), and to minister the needs of believers. However, sometimes with the permission of God or to carry out some heavenly scheme on Earth, they appear before man.

In the Bible, there are three kinds of angels who not only look different, but also serve distinct purposes.

There is a fixed hierarchy of angels according to the Bible. They can be categorized into three levels. The highest one is that which is believed to be closest to the Lord and their function is to praise Him. The middle one comprises those angels who possess extraordinary virtues and powers, and have control over dominions. On the lowest level are the angels closest to humanity. They are meant to assist humans meet their salvation.

Guardian angels do exist in the Bible.

The phrase, “angel watching over you”, is not for nothing. There are many instances (Acts 8:26, Acts 12:15, Daniel 10:13, Hebrews 1:14, etc.) in the Bible that reiterate the existence of guardian angels – those who help humans in situations of need and difficulty.

Biblical Angels are not meant to be worshiped or prayed.

In Revelation 19:10, an angel clearly tells John not to worship him, but only the Lord. Besides, Hebrews 4:14-16 also tells us not to pray to angels as a means to reach the Lord. It is possible for mankind to directly pray to God and only He has the power to answer prayers. Hence, there is no need for any middleman in between God and man.

Some angels fell from Heaven.

Not all angels reside in Heaven anymore. Some of them chose to oppose God, to rebel against Him and so, God banished them to lower realms. One of the classic examples of this is Lucifer who was believed to be God’s favorite in the beginning. However, after God created mankind, Lucifer rebelled against Him and was thus banished in a prison cell in the lowest level of Tartarus, commonly known as Hell. But not all fallen angels were banished to Hell. Some of them also reside among men, encouraging them to sin, which is why they are known as demons.

There are always more good angels than the bad ones.

Isn’t that a relief? According to Joel 2:11, God’s army always outnumbers the demon army. Owing to this, evil is destined to lose in the Universe, always and forever. There is, therefore, absolutely no need for us, humans, to fear about anything. God is on our side and His will, power, and goodness will always prevail in the world, thanks to His mighty angels.

Angels can’t die. They are extremely powerful celestial spirits who are supposed to fight the heavenly wars until the end of time. Essentially spiritual in nature, these wars are fought for the sole purpose of saving the Universe from destruction, or what is commonly referred in the Biblical lore as the Apocalypse. These are essentially battles between good and evil, where good is always supposed to prevail at the end.

It is impossible to count the number of angels.

According to Revelation 5:11, there are thousands upon thousands of angels in existence. They are everywhere, in every realm – Heaven, Earth, and Tartarus. Some of them are good and others not so much. They surround the throne of God and encircle the Earth, encouraging and/or discouraging us to do what we do.

Angels have the ability to teleport.

Speaking of superpowers, angels sure have one, using which they can travel from one place to the other in a nanosecond. Not only that, they can also travel from one realm to another within no time. Some believe that angels have wings and hence, it is possible for them to travel between places and worlds in a very short time quite easily. Whether it is the presence of wings or the power to teleport, we humans sure have much to envy here!

Everyone is assigned a specific guardian angel.

Now, is that supposed to make us feel safe or creeped out? Well, that depends on individual outlook, but God surely has designated a guardian angel to look over each one of us. Our angels not only help and protect us. They also act as our guides, so we can find our way to Heaven after our death. They are also supposed to help us out through the path to attain salvation.

Avoid taking the name of your guardian angel.

Yes well, Biblical scriptures tell us to refrain from uttering names of our guardian angels even if we know them. And how can we know them? Angels can communicate with us in our dreams. So, it is quite possible that our angel might have revealed his name to us. But still, we are not supposed to say them out loud because even demons, who are fallen angels, can communicate through dreams. So, what if it was a trickster demon in your dream telling you his name rather than your guardian angel? Difficult to say!

We know the names of only three Biblical angels.

This is weird, but true. The Bible contains names of only three angels viz., Michael, Gabriel, and Lucifer. So, how do we still know some other names like Raphael, Raziel, Uriel, and so on? Well, there are several other supporting religious scriptures, which mention some other angel names. But considering the fact that we simply cannot comprehend the number of angels that exist, it is impossible to know all their names.

The stereotypical image of angels sitting on clouds playing their beloved harps and flutes is well known the world over. But, does the Bible contain any lore about this? Well, the Chapter of Revelation mentions some four angels sitting in Heaven holding a harp in one hand and a bowl of incense in the other. There are also references in the Bible of angels singing praises of the Lord. So, it is convenient to infer that they indeed know their songs and musical instruments.

With so much information about Biblical angels from authentic scriptures, we can say that Hollywood has been presenting a rather incomplete and incorrect picture to us. Every being in this Universe has certain limitations and even angels are not exempt from this rule. Thanks to the Bible and other supporting scriptures, we know a lot about these celestial beings. But it is also equally important that we don’t always ask for their help and make efforts to do things right in our own way. Angels are guardians and protectors, but they are also our guides. Therefore, it is more important to learn from them rather than depend on them to resolve our problems.

The Bible contains limited references to angels when we come to speak of it. Many times, we find that there are several open ends left in the religious treatise with ample room for us to draw our own conclusions. There is still so much more to know and learn about the Biblical angels.