What Do Spirits Mean in Hawaiian Culture 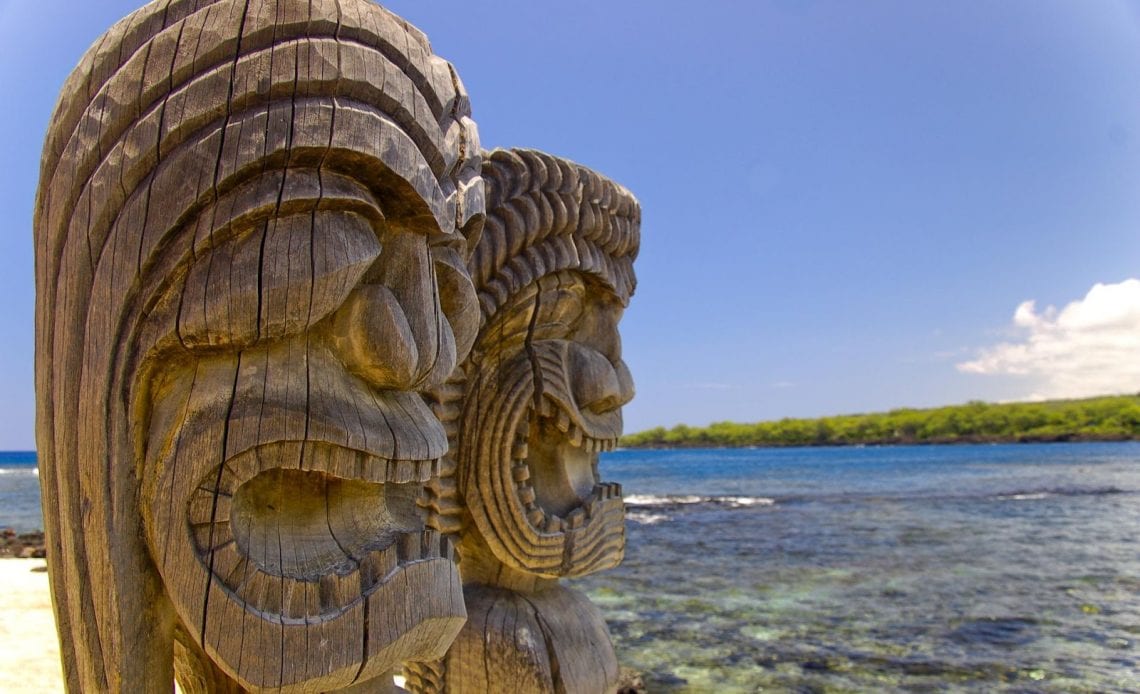 Hawaiian spirituality is a part of a long and vast Polynesian tradition. It is based on the belief that the elements of nature are controlled by the gods (akua and kupua), the spirits of the nature (awaiku) and the spirits of the ancestors (‘aumakua).

The world of the spirits is called pō (the underworld). It is inhabited by gods, semi-gods and the spirits of the ancestors. When the soul of a deceased person does not reach the underworld, it continues to exist in the world of the humans as a spirit. Such spirits can be benevolent and protective, aloof and rambling, or malevolent and destructive. Wandering spirits who could not reach the underworld often start living in a stone. In Hawaii, stones can be either sacred or inauspicious, depending on whether they are inhabited by gods or evil spirits.

The polytheistic Hawaiian religion reserves a special place for the kahuna. The kahuna are the intermediaries between the material and the spiritual worlds. They can be healers, prophets, sorcerers and magicians.

Spirits in Hawaiian culture are important factors contributing to one’s success or failure in life. Success is a result of the protective power of a guardian spirit. Bad luck and misfortune are caused by evil spirits.

The Hawaiian spiritual tradition teaches that one needs to be perceptive to messages that come from all sources and in all shapes. Spirits can speak to us through the animals and the plants. We can sense their presence in the scent of the flower and in the owl’s hoot. Those fluent in the language of animal symbolism are always guided by the important messages from the spirit world.

The spiritual tradition of Hawaii is rich in stories and legends about spirits. At times, the spirits act as powerful allies and protectors. At other times, they guard the water, the trees and the overall balance in the nature. When sinister and scary, Hawaiian spirits challenge the humans to overcome a weakness, solve a problem, and make spiritual progress.

The ‘Aumakua — sacred guardian spirits of the family

The spirits of the ancestors can sometimes pay a visit in a form of a large black moth or a strong flower fragrance. They can appear as water beings — Mo’o spirits, sea turtles and sharks. Ancestral spirits can also announce their presence in a form of a bird — a hawk, crow or an awl — that suddenly appears in the family backyard. Eating meat from an animal that represents one’s family ‘Aumakua is considered a taboo.

Hawaiians believe that spirits called Aqua Noho (‘sitting gods’) can enter a living person and speak through him. The person whose body is temporarily possessed by a ‘sitting god’ is called haka (medium). At the time of the spirit possession the haka receives mana (spiritual power) and is regarded as divine.

A Hawaiian kahuna sorcerer can conjure up or create wish-fulfilling spirits. In a ritual that involves elements of black magic, the kahuna can turn the spirit of a recently diseased child into a Unihipili, a dreadful serving spirit. This disembodied spirit, endowed with mana (spiritual power), brings tremendous supernatural powers to the owner. If not handled properly, it can also cause devastation to an entire family for many generations.

An important category of spirits in the Hawaiian tradition are the Mo’o spirits. All streams, pools, ponds and water caves in Hawaii are protected by the Mo’o, water guardian spirits. These shape-shifters can be as small as common lizards and geckos, or as large as mythical dragons. The female Mo’o spirits can be bewitchingly beautiful maidens or water dragons.

These spirits also control the weather and regulate the amount of fresh water available on the islands. When angry, their wrath is expressed in a form of huge waves or torrential rains which sweep away anything in front of them.

A popular Hawaiian belief warns against whistling at night, as this act summons the Hukai’po spirits. The Hukai’po are spirits of ancient Hawaiian warriors, also known as the ‘Night Marchers’. When they march at night, people hear a drumming sound or a shell trumpet. The Hukai’po carry torches and arms, and they repeat eerie chants. They either leave strange footprints, or levitate at a few centimeters above the ground. There are both male and female warriors among them.

At night, the Night Marchers travel around the Hawaiian Islands, visiting all the battlefields at which they had once fought. One is advised against looking at these spirits in the eye — a mere glance immediately takes the man to the spirit world. A man who has a close encounter with the Hukai’po is advised to lie down, remain still, and let the warriors continue undisturbed. Hawaiian people believe that Hukai’po avoid the areas where there are ti shrubs (Cordyline).

Menehune — the trickster dwarf spirits of the Hawaiian forests

Menehune are small, supernatural spirit dwarfs, inhabiting the caves and the forests across Hawaii. They are similar to the fairies and elves of the European folklore. The Menehune are hardworking and industrious, and they are generally considered benevolent.

These woodland spirits appear in many popular Hawaiian folktales. In a Hawaiian legend, the Menehune spirits annoy the hero Laka who is trying to make a canoe. Every day Laka cuts down a tree for his canoe, and every night the Menehune restores the fallen tree. Laka eventually makes a deal with the dwarfs, who build his canoe and accompany him on a great adventure.

The man-eating spirits of Ni’ihau

The Hawaiian spiritual tradition includes stories of some dreadful, man-devouring malevolent spirits. These evil spirits represent the dark side of reality. More importantly, they force men to face the unknown, take agency over their destiny, and evolve into heroes. One of the best-known legends of this kind narrates the journey of five poor fishermen.

Five destitute fishermen travel on their canoes to the shores of Ni’ihau, in search of a good place to fish. Their journey is successful, and they catch a lot of fish. At sunset, they leave their canoes and go ashore to clean and salt their fish. After taking dinner they fall asleep, planning to continue fishing the next day.

When they get up in the morning, they find one is missing. Assuming that their friend is an early riser already gone fishing, they too hop on their canoes and go fishing. They return at sunset, but the fifth man is still missing. Even though scared, the four fishermen decide to stay, since going home empty-handed is not an option for poor men.

The next morning only three of them wake up. They go fishing again, and have another successful day. During the night they stay together in one canoe, close to the shore. They also take turns in keeping a night watch. In spite of all the precautions, two of the men wake up in the morning to a terrible sight. Their friend is getting eaten by a terrible flying creature that looks like a giant bat.

The two fishermen decide that it is time to fight this man-eating spirit. They spend their last day in Ni’ihau building a wooden hut. They also carve two wooden statues and place them inside the hut. In the night, the man-eating spirit, lured by the appearance of humans, enters the hut. The fishermen quickly set the hut on fire, hop on a canoe, and leave the shore behind.

There is another legend from the Hawaiian tradition, reminiscent of the legend about the five fishermen and the man-eating spirits of Ni’ihau. According to it, Haiali’i and his army of evil spirits killed and fed on the people who visited the Hawaiian island O’ahu. The visitors to O’ahu eventually tricked Haiali’i and his malevolent spirits by carving wooden statues. As soon as the spirits began feasting on those statues, the clever men set the wood on fire and got rid of these monsters.

Gods as sacred spirits in the Hawaiian spirituality beliefs

In the early Hawaiian spiritual tradition, two Goddesses and four Gods were revered as Sacred Spirits or personifications of the forces of nature. Pele was the Spirit of the fire and the volcano, while Hina was the Spirit of the Moon. Known as ‘the leading Spirit among the Great Spirits,’ Kāne was the Creator Spirit. Kū was the Warrior Spirit. Lono was worshiped as the Spirit of fertility and peace. Kanaloa was the Ocean Spirit.Early Hawaiians worshiped these Spirits of nature and believed that they possessed both earthy and spiritual forms. The earthly forms were called kino lau (‘many bodies’). In the abundance that nature provided, Hawaiians saw the presence and the gift of the divine.